What is the appeal of  American Graffiti ?

I've been kind of thinking about this since I drove out to Modesto to the Graffiti USA museum. This museum is going to be a testament to this period.

Where were You in '62? Where do wish that you had been? You can replace the reality of your past with this stylized, fictional, version. A younger generation can imagine what it was really like, or what they wish it was like. Or we could be just looking at the past through rose colored glasses. What could be a more natural reaction?

1962 was over 60 years ago. I was eight years old. I'm 67 now. To have lived through this and participated in events that occurred in this era you'd have to be at least 75 years old. I'm sure that the movie tells the story of some specific demographic. I actually met three gents at the Modesto Graffiti Museum Cruise In that had participated in that area's cruising heritage. This is where George Lucas got his inspiration for the movie. From his own life experiences in Modesto.

People love all kinds of movies that have no relationship with their actual lives. Consider Star Wars. (Another Lucas masterpiece!)

I was at the Paso Robles West Coast Kustoms Nationals many years ago. There were a couple of stars from AG, Bo Hopkins and Candy Clarke in attendance. They were selling autographed photos and chatting with fans.

In an uncharitable mood I turned up my nose at buying a photo or even saying hello. Washed up has-beens is what they were. Maybe.

Later I got to thinking. These two people were part of the ensemble that produced a true American film icon, beloved by millions and going onto successive generations of fans. This movie lives on in hearts of millions of old car fans. Mine included.

What have I done, or will I ever do in my life, of any value, that will touch even a small number of people? Elite film critics can turn their nose up at this film, it may not be highbrow, but it is loved!

This is one of the few films that I have watched multiple times. When it would appear on a cable TV schedule I will generally watch it, it doesn't even have to be from the beginning! There are certain scenes that I find memorable and I daresay iconic. One of my favorites is after Milner races Falfa on the downtown street, and the '32 is sitting alone on the street in the dark in a distant shot. I will never own a classic hot rod like that, in fact I really don't even want a classic hot rod like that. But these were the cars that I read about for years in all the hot rod magazines as a kid, and they were a part of my automotive hopes and dreams. I can easily see and admire the attraction of these machines, they have a brutal beauty.

Now with YouTube it is easy to watch and re-watch many segments of the movie, and I have my favorites of the compilations that are presented there. I also have a copy of the movie on cd. 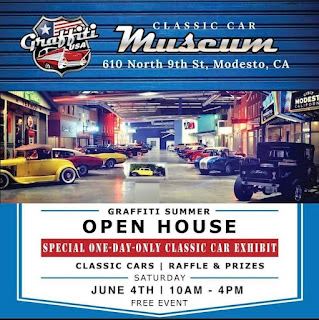 Today I went to a cruse in/ open house at the Modesto Graffiti USA Museum.  It was a good excuse to take my new Mustang out for a drive.

This picture depicts what the finished museum is going to look like.  A simulated Downtown streetscape area with cars parked along the street at the curb. This reminded me of the street scene sections at the Petersen Museum. It is designed to replicate some of the scenes along the classic Modesto Cruise circle. Most cities had a cruise route around the downtown area. My hometown didn't, but we went to a nearby smaller town. It was a short route up and down E14th St. in San Leandro. This town has been famous for aggressive law enforcement, but things were still fairly mellow back in the early 1970's. The cruising itself was kind of a waste of time, unless you knew the other participants. It was all about showing off your car, meeting up with friends, maybe meeting some new people.

It's interesting that Modesto has this strong relationship with the movie. It's true that George Lucas grew up in Modesto and the movie was based upon his experiences in that town. He graduated from high school in... 1962!

The movie was actually filmed in Petaluma, where the downtown movie filming locations are the actual downtown streets and buildings. Most of these locations are still very recognizable. The town also has it's own AG events. As a fan I have enjoyed visiting the town and seeing where the movie was filmed.

Modesto has really taken the film and fans to heart. It is a way to draw tourism to the city. There is a Graffiti Week of activities. Car shows, cruises, movie screenings, concerts, and a parade of cars through the Downtown area.