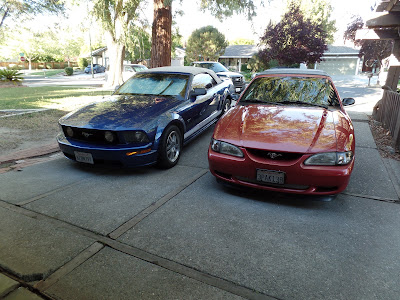 I immediately said "Whaaaaat? Where do you get that idea from?" 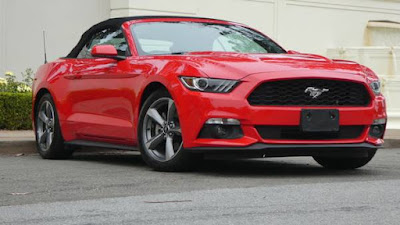 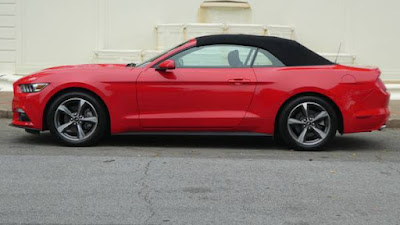 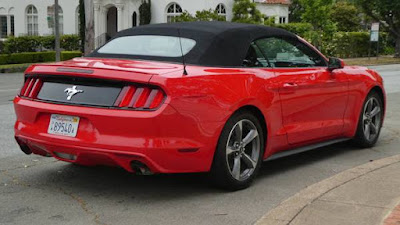 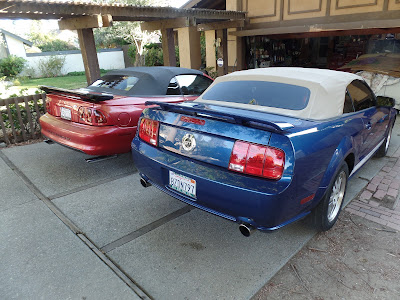 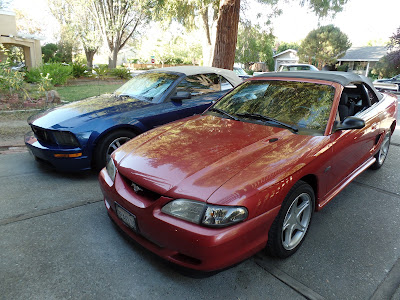 But you know, she was right. That woman is more perceptive about cars than I thought.

We've had a S197 Retro Stang since 2007 when we bought that one new. I think that those cars look great, although the styling is a melange of first gen Mustang cues. Somehow it all comes together just right, at least in my eyes.

About four years later I added a '96 SN95 convertible to the fleet. At the time I wasn't that impressed by the design, but I couldn't find a Fox body in good shape for a price that I could swing. So I bought the '96 and over the years began to appreciate it's good qualities.

It was a complete departure from the earlier Fox design and it was quite different from the following 2005-2014 models. The design was a modern interpretation of the original Mustang concept without trying to look like a first gen. The body was modern, wedge shaped, and  smoothly styled with aerodynamic headlamps and a simple grille opening. Inside, the dash did carry a nod to the early dual cockpit design. The dash contained all the instruments in a large binnacle directly in front of the driver, all easily visible.

Compare this to the S197. Besides the obvious body design heritage cues, the interior also carries them. The dash is flat on top like a '67-'68 and the speedo and tach are buried in a couple of chrome lined tunnels. They really remind me of the dials in my '70, though these are much easier to read.

The retro phase came to an end  with the 2014 models. The new 2015 car doesn't really recall the earlier models. Except for the roof line, which really looks like the '69 -'70 fastback design. I think that this is the car's best feature. The front end doesn't look anything like an earlier Mustang. It looks more like an interpretation of the generic gaping maw look. The leading edge of the hood curves gracefully down to the grille, unlike the abrupt sharp line of the past model. The fenders are curvaceous and blend through the doors into the quarter panels.

It doesn't really look like a SN95 but it is clearly a departure from the S197. I can imagine that the 2015 model could have followed the earlier SN95s, it looks like an evolution of that design, There aren't any real sharp edges on the 2015. The New Edge lead to the S197. The flat sides combined with the wheel arches are features that tie the two designs to each other. The ten years of the S197 could have been omitted from an evolutionary design stand point, and the 2015 design would look like the obvious next step.

Irregardless of all this, almost every model design of the Mustang will find it's devotees. The first gen cars have been hugely popular since their introduction, and their popularity is still strong, over 60 years later! I never thought that Fox bodied cars would develop a strong following, since they were a complete break from traditional styling cues, but they did. A whole generation of fans consider them to be "the classic Mustang." Even the SN95s have their devoted followers, probably due to Mustang fans finally accepting the Modular 4.6 motor. Also the addition of Cobra and Saleen models brought a little glory to the series.

The poor Mustang II has been very late to develop a strong fan base, though these were big sellers when introduced. The four cylinder models were just what the public was looking for at the time. Fuel economy became very important during that period. There were some V8 and V6 models available for a limited time, so these motors can be installed in any Mustang II, Their front suspension was adapted to many V8 powered street rods and has been more popular than the actual car itself.

The Mustang is the second longest running American car line, next to the Corvette. Being a mass market vehicle, it had to follow market demands. The Corvette, as a niche vehicle and was free to remain closer to its roots. Although as we know, the Corvette, languished without development and improvement, for a long period. In fact the re introduced Mustang GT 5.0 was at one time the quickest American car.

Mustang fans can choose from an almost unlimited variety of vehicle and model combinations. That has always been a big factor in the Mustang's continued popularity.